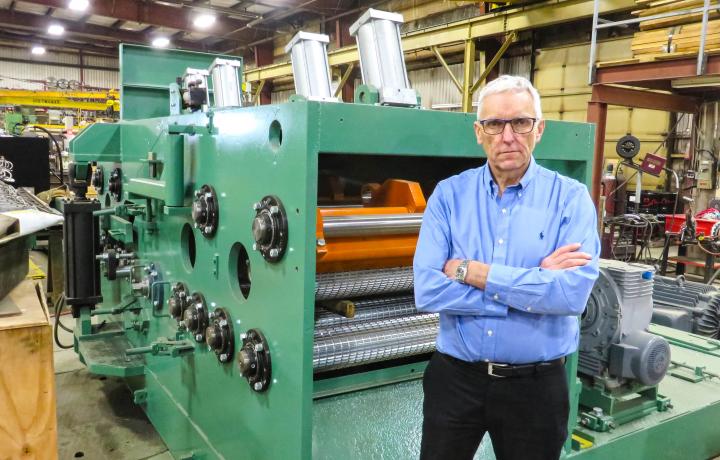 Lindsay’s TS Manufacturing began in 1973 when Ted Smith’s older brother Tom wanted to strike out on his own and use their combined talents and energy to build their own manufacturing plant to build equipment for the burgeoning forestry industry in Ontario.

Today, the company boasts a 65,000-square-foot facility in Lindsay, and a workforce of approximately 75 to 80 highly-skilled employees, offering a startling array of equipment and machinery for every significant aspect of the lumber industry – exporting more than three quarters of their production to the United States and even further afield.

“When we started the business 45 years ago we didn’t have any expectations. We were just anxious to do something and thought we could make a go of it. Our vision didn’t set too far beyond the borders of Ontario and Quebec in those days. I was only 22 when we started in business so there were no long-range plans. We probably thought we were going to get rich quick and retire. Well, that hasn’t happened yet,” said Ted Smith with a good-natured chuckle.

“At the time, Tom worked for another sawmill machinery company in Lindsay and I worked for them part-time when I was going to college. He became the manager of their sawmill division, but it was a small company and he became dissatisfied with them and asked me if I wanted to quit my job and go into business with him. I was a mechanical tool designer at another local business and had just finished my apprenticeship. We both quit our jobs, bought a piece of industrial property and built a small plant. And that’s how we started. And here we are 45 years later and we’re still dealing with the forestry industry, including sawmills and pulp and paper and board and all the related wood consuming industries, as well as some mining. Those are our three main sectors.”

Over the years, TS Manufacturing has developed relationships with firms dealing with higher end grades of wood, which required mechanized equipment that is more sophisticated and more appropriate for handling the better-quality wood in a manner that does little damage to the product itself.

“We specialize in what you would call high-value wood manufacturing. So, grade lumbers like hardwoods and high-value softwoods are where most of our business is. There are companies that are much larger than us who work with larger softwood mills that do, for example, 2x4s and 2x6s. It’s not our main customer although we do work in those industries. But we specialize in that high-value wood market which is a smaller share of the overall industry, but we have become pretty well known in it,” Smith said.

One of the keys to success for TS Manufacturing has been the firm’s willingness to always be on the lookout for new and innovative products to help their clients become more effective and efficient at their jobs.

“I think because we were young when we started we had a lack of inhibition at going beyond what we were familiar with. We have always been willing to develop a new product and as a result, we have a fairly large R&D component to our business every year. We spend a lot of money on R&D and we don’t have a set goal, but when we see something that is a marketable idea that hasn’t been done, we invest in that idea. Twenty-five percent of our staff is in the engineering division. About 10 percent or more of our engineering time is spent on R&D,” Smith said, adding that his three sons have been on the forefront of this part of TS Manufacturing’s mandate.

“We haven’t been afraid to develop products or expand upon what’s already on the market if we feel there’s a better way to do it. My brother left the business about 15 years ago and my three sons have come on board, and over the last seven to ten years they all have acquired key positions in the business. They have driven a lot of the technology and expansion and our products have now become recognized as being cutting edge because of this emphasis on technology and innovation. And I am not blowing my own horn, this is what we have been told by customers, not something our marketing guy dreamed up.”

And it has meant that the business is going further and further afield. Smith said that approximately 80 percent of TS Manufacturing’s business is going out of Canada, with much of it to the United States, but an increasing amount going to Australia and New Zealand as well.

“We started building equipment for sawmills and doing installations in the southern Ontario area, meaning a 250-mile radius from Lindsay, which was where most of our business was at the start. And it just slowly grew so that most of our business is now exported. Eighty percent of our production on the average is outside Canada and probably 80 percent of that is to the United States and that’s been the case since before the recession, so for about 12 years,” he explained.

“We became better known and we did more marketing and went to international trade shows and things like that. The largest job the company has ever done was in western Australia, which is basically the furthest place from Lindsay, Ontario that you can be. It was 24 ship container loads of machinery for that one job. And those people knew of us through a trade magazine. They called us and inquired about one thing and it grew from there until we eventually did the whole project. Since then we have done four or five more big projects in Australia and New Zealand.”

While the company has grown steadily and been able to weather the storm of economic downturns such as the major recession around 2007-2008, TS Manufacturing has been challenged to a degree by the difficulty in recruiting highly skilled engineering staff. It really is the primary challenge facing Smith and his company and something that he is working hard to overcome.

“We are in a small town and we are always usually going outside of the area looking for engineering staff. Right now, honestly, we could do 50 percent more business if we could expand our engineering department to the point that we are considering buying out other companies just to get their engineering capabilities or putting engineering offices remotely from Lindsay,” he said, adding that outside of engineers, hiring locally has been a more successful endeavour.

“The Lindsay, Peterborough and northeastern GTA area have a good pool of technical talent. There is a pretty good metal trades base of people, particularly in Lindsay – machinists, welders, fitters and millwrights. It’s always a challenge but we have usually been successful in finding those people. We also do a lot of training and a lot of apprenticing, so that’s helpful. But the engineering staff required for building this type of equipment is specialized. There’s no local competitor that is also training people in our industry, so when we hire an engineer, they usually have to be trained or experienced in our type of business.”

Challenges aside, Smith said there is no doubt that TS Manufacturing will continue to be based out of Lindsay and the City of Kawartha Lakes.

“When we started here, because we lived here, I don’t suppose we ever entertained locating anywhere else. We have never considered leaving Lindsay. We have considered other locations for branch operations. A lot of our business is in the United States and we have considered putting a smaller manufacturing and service location closer to our customers, and that probably will happen just as a necessity,” he said.

“And that’s not because there is anything negative about Lindsay, it’s just because we need to get some people closer to our biggest customer base. And that will probably spur more things as a result. That will give us a bit of a service base in the southeastern United States.”