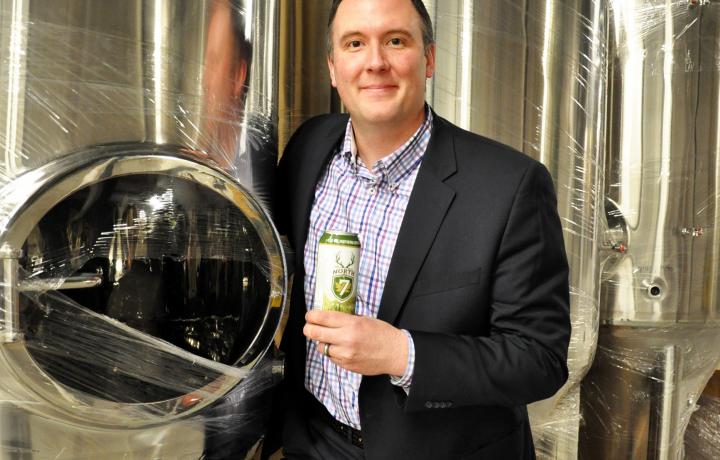 Get the founders of 4 Degrees Brewing Company, Nick Ritchie and Andrew Howard, talking about beer and it’s easy to see where their passion lies – with the cold, frothy, hoppy brew that’s taken the Ontario food and drink industry by storm, and is set to do the same in Smiths Falls.

With breweries popping up in virtually every community in Eastern Ontario, you’d think people would tire of hearing about yet another opening, but it seems there’s no end in sight for the craft brewery trend, least of all in Smiths Falls. Here, the local community has rallied around 4 Degrees, and waited patiently for more than five years for its arrival.

What began as a passion between long-time friends, Howard and Ritchie, soon expanded to include wives, friends, and colleagues, and launched what could be the coolest brewery ever. The vision that Howard and Ritchie had for their business was simple: A laid-back, trendy, and happening location to hang out with friends, drink beer and munch on nibblies – oh, and brew beer, of course!

While the road to full production in Smiths Falls began as far back as 2012, it’s a journey that’s been well worth the wait. With full time jobs and families of their own, the two Smiths Falls’ businessmen somehow found the time to secure more than $45,000 in funding through Valley Heartland Community Futures Development Corporation’s Eastern Ontario Development Program over a two-year period. And after bringing in partners Tim Vandemeer, Joe Adams and Chris Haines, not to mention their wives, things began moving quickly for the burgeoning brewery.

What initially got these two entrepreneurs rolling on the brewery trail was a drive to change the tide in Smiths Falls, a community already reeling from the closures of a handful of major employers, including Hershey Canada. To help change the conversation, Ritchie and Howard turned to one of their favourite products – beer – and worked together for several years to get the business off the ground, before bringing in some fresh blood to speed up the process.

“Andrew and I thought, let’s stop talking about Hershey’s, let’s start talking about the good things happening,” co-founder, Nick Ritchie said, “We’re riding on a wave of positivity right now, people are excited about us getting going.”

As with everything 4 Degrees Brewing does, there’s a story behind their new location at the County Fair Mall in Smiths Falls. The mall’s story is one wrought with tales of store closures of retail giants like Staples, Zellers, and finally, Target, but Ritchie and Howard saw that the influx of some new – and cool! – blood in the mix was just what was needed to reinvigorate the mall.

The new 4 Degrees Brewing location is one that pushes all the right buttons – trendy, open concept, and with just enough quirkiness to make their brewery an instant success. A red brick exterior that mirrors the red brick found on historic homes in Smiths Falls pairs well with a cool roll-up door at the front of the store leading to an on-site patio where customers enjoy a brew on a hot summer’s day.

Inside, a tiled brewing space at the front of the store, a long tasting bar, and a long banquet-style table that’s reminiscent of the beer halls in Europe, all work to make 4 Degrees Brewing a hotspot for tourists and locals alike.

Always a supporter of local products, 4 Degrees Brewing features tasty tidbits like a charcuterie board serving local meats and cheeses. A “guest tap” at the tasting bar gives other local breweries a chance to highlight their own brews to the community.

“Anything that’s local, we’re down with it,” Ritchie stressed.

Their current product line-up is short but sweet: True North of 7 and True South of 7 offer two completely different takes on craft beer and were the first products on the 4 Degrees Brewing line-up. North of 7 is an easy-drinking lager, while South of 7 is an amber-hued ale with rich, caramel undertones.

Next up, and newly released by the brewery, comes Frost & Wood 55, named for the local company producing plowing tools that closed 55 years ago, a date that worked well with the 5.5 per cent alcohol found in the brew. Old Slys 69 is a flavourful recipe that boasts a robust 6.9 per cent alcohol, and is a tribute to the Old Sly’s lockstation along the Rideau Canal, a centrepiece in Smiths Falls.

Their next brew project is one that once again embraces local history and importance to the community.

“We’re looking next at naming new products after the battles people in Smiths Falls fought in,” Ritchie explained. “We want to honour the men and women who served from the community.”

It’s safe to say that the recipes and marketing ideas will keep on coming from this trend-setting company. Keep an eye out for more new releases from 4 Degrees Brewing, you can drop by their new location in the epicentre of Lanark County and alongside the UNESCO World Heritage Site the Rideau Canal, scenic Smiths Falls.