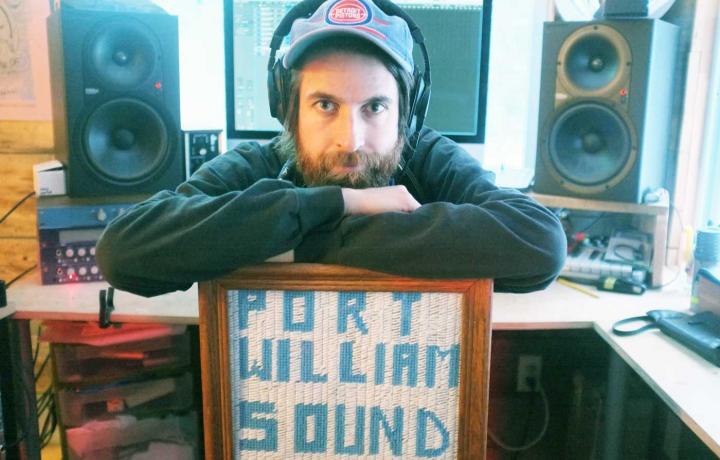 As a singer-songwriter, performing as Evening Hymns, Jonas Bonnetta found living in Toronto was a good way to become part of the Canadian indie music scene, but he came from a rural background near Peterborough, and said he always knew he would eventually leave the city. This led him to move to Tay Valley several years ago, although he was drawn back to Toronto a lot, and was touring most of the year as well.

On one of those trips to Toronto along Hwy. 7, he turned off at Mountain Grove Road to see a property he had heard about through a real estate website. The property is very close to the highway, but is still pretty secluded. It has a treed canopy entrance-way leading to a small house and an outbuilding on a piece of land that is adjacent to a larger farm. He hasn’t looked back.

Jonas has always been interested in making musical recordings, not only in the technical requirements but in the atmosphere that is necessary for an individual or a band to fully commit to a recording project, free from distraction. Over the years he has accumulated equipment in order to make his own recordings and he has found that he enjoys recording other musicians as well

Flash forward a few years to the spring of 2016. He wanted to do less touring, preferring to spend more time creating his own music and working with others. He thought that if he could upgrade the studio space he had developed on his property, and provide simple accommodations for musicians, he could complement the income from Evening Hymns.

That’s where the idea for Port William Sound came from, named after a fictional town in novels by Wendell Berry.

He approached the CFDC for advice on how to make his recording studio enterprise more of a sustainable business, and to see if they could help with financing and grant money to help him upgrade his studio and build a small building to accommodate musicians.

“I contacted them, and Tracey Parker (business Development Officer) came out and we talked about my short and long term projects for enhancing the property as a recording retreat. And she said ‘we can help you with all these projects’, with financing, equipment purchases, everything. Since then I’ve worked with Sue Theriault on my EODP grant.

To me the CFDC has been validation that this was a community where I belong. I would have likely done these things anyway because I am stubborn and ambitious, but it certainly jump started it. ”

The project has developed over time, partly because of planning restrictions and available funding.

Last fall, the concrete pad was poured for a 672 square foot studio, designed for optimal acoustics and comfort. Jonas is hoping to have the studio completed by the spring. The CFDC has provided financing, and an Eastern Ontario Development fund grant, has helped with equipment upgrades, and a grant from the Kingston Economic Development Corporation has helped as well.

The new studio will enhance what is already a thriving side business for Bonnetta. The existing studio has been booked for up to 21 days a month.

“Everybody who comes once wants to come back again. They are falling in love with the area. They are looking at MLS listings before they leave.”

The advantages for musicians coming to record at the Mountain Grove studio are twofold. For one thing the studio fees are lower than they are in Toronto, where studio space can easily cost $1,000 a day. The other difference is more intangible.

“When musicians come here, there are few distractions. They can go for a walk, go for a ski, use the sauna here, share a meal with band members, and really concentrate on the music they are working on.”

Jonas sometimes rents out the studio itself for bands who want to handle their own recording, and he sometimes works as a recording technician. More and more these days, he is either hands off or gets involved as a technician/producer. It also has enabled him to expand his circle of musical friends.

“As a producer, I find myself trying to capture what the musicians are trying to capture. I’ve been working with a lot of young people, a lot of people are coming out and recording for the first time, because it is affordable.” He thinks that he picked the right time to start a new business in Frontenac County. “There is energy and support for new ventures here,” he said.